Reviews, reflections, rants and other such writings...

Donkey Kong Country 3's Box Art
I didn't receive the third installment of the Donkey Kong Country Trilogy until years after it came out, and I didn't even know it existed. Therefore, when I finally got it I was amazed that it had gone unnoticed by me and as such it holds a very special place in my heart because of the sense of wonder I had when I first experienced it. However, I didn't find it as large a step up as DKC2 was to DKC.

The games story goes something like this: DK and Diddy are off exploring the islands when some Kremlings, now under some unknown new leader, kidnap them. The only one left to save them is Dixie Kong of course, and because they had to include a character even less important than her, they created Kiddy Kong, here lovable baby cousin. Reactions to Kiddy tend to be mixed, but I love him. However, this pattern of making the sidekick take the limelight with a newbie, although brilliant in DKC2, now just seems almost like a bad cliche`. Fans really expected a return of DK by this point, and although Dixie may have deserved her chance at becoming a hero, this game obvious wasn't enough to cement her as a Video Game hero like DKC2 did for Diddy.

The Dixie/Kiddy combo does do one important thing to mix up the game play though; it takes the team-up abilities from DKC2 and now has two characters of different weight classes teaming up. This allows for different results depending on who is the base of the team, and allows for some interesting game play puzzles. Kiddy can throw Dixie ridiculously high, while Dixie struggles to lift the giant baby. She can toss him up just a bit after which he comes thumping down and smashing out any secrets below him. She can also ride him like a barrel. The return of the heavy/light combo from DKC is welcomed, and allows for some creative use of the last game's innovations.
This time there's been a change to the DK Coin system of the previous game. The DK Coin, which is featured as the review coins at the bottom of every review, is no longer found hidden in a level. Now, a new enemy named Koin holds the item. He has a shield that he points at you at all times, and so you must bounce a barrel off of a wall to hit him. This provides some creative puzzles at some points in the game, but for the most part just limits the usage of the DK Coin and becomes stale before the end of the game. 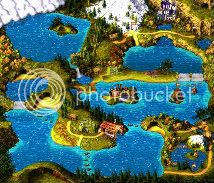 The game's map screen is one of it's best innovations. While the DKC2 map followed the formula of DKC pretty closely, this one takes a large departure from that. You now have the ability to walk all over the map, and it is fully explorable. There are also numerous Banana Bird caves hidden on the world maps, which are needed to collect all the game's banana birds.

The Kong Family returns once again. Wrinkly has now retired from her days as a school teacher, but she still returns to save your progress. Funky now runs a boat garage, and will lend you various aquatic vehicles that allow you to progress to further worlds in the game. Swanky has now begun a sideshow attraction in which you compete against none other than Cranky Kong in a target hitting contest. This is an interest inclusion, because it shows you from a backside view. This 3D effect just shows how much Rare could push the limited technology they were presented in a time when the N64 was the go-to system. Aside from the normal helpers, the new region features a whole family of bears known as the Brothers Bear. These add almost an RPG-like element to the game, in which you must acquire a number of items through various puzzles and bring them to the bears to help them with whatever problems they have.

The Animal Buddies have also returned, although the most famous one of all, Rambi, has now been replaced by Ellie the Elephant. Ellie can suck up barrels with her trunk and can shoot water in some levels. Returning buddies include Enguarde, Squitter, and Squawks, while the only other newbie is an annoying little bird name Parry. Parry flies directly parallel to the player, and you must keep him alive by jumping between obstacles. By keeping him alive you receive a generally big reward, but it is difficult to do this and a little irritating as well.

The game play itself hasn't changed much from the previous. It's clear that Rare had reached the apex of DKC gameplay with DKC2, and so it remains largely unchanged in this game. However, in order for it not to become just a new set of levels they were forced to make nearly every level a new sort of "gimmick". Basically, they have very few normal platforming segments, every thing is some unique puzzle or game play mechanic that is only present for one level. For instance, one level you must unlock doors by killing rat enemies, in another level lightning strikes the ground wherever you are standing, forcing you to continually move forward. Actually, there are a lot of levels in which you are forced to move constantly, and that's one of my major gripes with the game. It includes just as many secrets as the previous game, but it makes it much harder for you to slow down and look for them. I've never liked the fast paced levels, and this game makes a career out of them.

The Arich boss Fight
This time around the enemies have dropped the universal theme that DKC2 had. Now all the enemies are brand new and look very different than in previous entries. Kremlings now come in every color, and seem a bit more cartoony this time around. However, I really like all of the bosses in this game. Arich is one of my favorites in the series, and a couple (Barbos and Squirt) are played while riding an animal buddy. They are all pretty challenging and unique.

The game's proposed "new villain" is Kaos, a giant green robot that you first fight in the third world of the game, however you later find out that this was a ploy, and that Kaos is actually powered by DK and Diddy and was being controlled by K. Rool the whole time. K. Rool has taken a mad scientist disguise this time, and his last minute revelation was actually pretty surprising and a pretty fun plot twist. The final battle is challenging enough, but of course it isn't the real final battle. Like it's predecessor, this game has a Lost World that can be unlocked by beating the game's bonuses. Upon defeating Baron K. Roolenstein a second time, the game's true final ending is revealed: K. Rool imprisoned the Queen of the banana birds, and once you release her she drops an egg shell on K. Rool. That's it. It's a serious step down from the ending of DKC2, in which the entire Kremling homeland was destroyed.

Disappointments aside, the game does somewhat improve on most everything DKC2 did. It's very well built and does a lot of things right. However, unlock DKC2, it never really comes together; the pieces don't really mesh all that well. You definitely don't get the same feeling of accomplishment upon its completion that DKC2 gave you. Overall, it's a very good game that does a lot new, but fails to really put it all together and become the real sequel to the masterpiece that was DKC2. I give it a 4 out of 5.

This article was written by a DKC Atlas Forum staff member. All opinions expressed within this article are those of the writer, and are not necessarily shared by DKC Atlas, or the DKC gaming community.